Battling the crisis: Dumping room rates is not smart Why actually?

Booking-CEO Glenn Fogel reacted irritably when asked if he would lower commissions because of the Corona crisis. He sees this differently: hotels should lower their room rates. Be very careful with this. Although it is at times unavoidable, it remains really undesirable. Not all hotel owners completely realize the relatively heavy impact that lowering of room rates can have on the overall hotel performance.

Price elasticity is the degree to which hotel-room-demand changes as a consequence of a change in room rate. The more sensitive the demand (variable), the more it decreases as a result of higher room rates. Lowering room rates has a positive opposite effect on demand. It is thus necessary to estimate how elastic the demand actually is. And to make it even more complicated, how it differs per market must also be taken into consideration. Business travelers are often restricted to time of travel for a specific location and number of nights. If they must come to Amsterdam for a business trip, they will not easily divert to Frankfurt simply because of lower room rates. 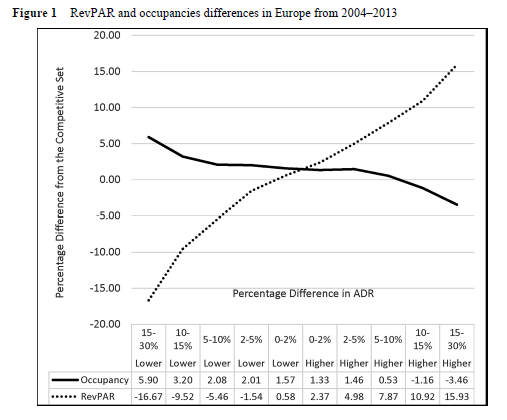 Linda Canina (Cornell) and Jean-Pierre van der Rest (Hotelschool The Hague) a few years ago. It shows that the 4000 hotels in Europe who, in the period 2004-2013 had a higher average room rate (ADR) than their direct local market competitors, indeed had a lower occupancy rate, but yet a higher RevPAR. Lowering average daily room rates, definitely under current economic conditions and regardless of whether the hotel is independent or part of a chain of hotels, is not profitable. Further research has also confirmed that most European hotel markets have an inelastic price elasticity; there is factual proven room for rate increase.

Does the average daily room rate thus weigh more heavily than occupancy? That is a bit too short sighted: it depends on several factors such as other streams of revenue, think of for example F&B. It is not for nothing that room rates in Las Vegas are kept low to increase occupancy: high occupancy means high turnover in other departments, of which of course the Casino being the most important one. But remember, this is not the case for most hotels as peripheral revenue (turnover from other departments) is but a small percentage of total turnover.

Aside from the power of ADR on turnover, there is still too little talk about the effects on profitability when changing room rates. The term “revenue management” does not help and is maybe even a bit outdated. Would it not be better to instead speak of Profit Management? Actions taken to stimulate turnover can have either a limited, or in some cases, even a negative effect on profit. The common expression “heads in beds” is not always well thought through; a higher occupancy in combination with lower daily room rates can in rare cases lead to a higher RevPAR, but can also still lead to lower profit. Surely, a higher amount of rooms being sold also brings more costs. Not only variable costs related to rooms (cleaning, amenities, etc.), but also costs related to other departments, such as, for example, rooms division.

After 9/11, many hotels have developed a “contingency plan” to put in place in times of crisis. The “flow-through” principle plays an important role in this. Flow-through indicates what percentage of turnover increase or decrease flows through to profit. Certain guidelines apply: turnover that strictly results from occupancy lies around 70%, quickly approaching 90 to 95% as a result of average room rate. This means that all pretty much all turnover generated from room rate increase or decrease directly streams into profit (or loss). This flow-through principle works two ways. Turnover loss means less profit; its intensity dependent on change in occupancy, the room rate, or both. In case of a decrease in occupancy, it is clear that maintaining a room rate will in any case be less painful (see chart 2). If a hotel can in this way reduce the negative effects, all the better. Van der Rest (Hotel School The Hague) and Harris (Oxford Brookes) have developed a good rule of thumb when it comes to this: if two hotels with the same variable cost levels are competing in the same market, but each  with a different average daily room rate, the hotel with the lowest rate will need a higher increase in occupancy if the competing hotel also lowers their average daily room rate. The same rule of thumb applies to hotels with the same average daily room rate, but different variable costs. The hotel with the highest variable costs requires a greater increase in occupancy as opposed to its competitor if it lowers its average daily room rate, in order to be able to maintain the same flow-through.

Focus on the guest

Does this mean that hotels may not or should not aim to do better than their competition? No, of course not. There are indeed alternatives to the lowering of room rates: from product diversity to segmentation management. The focus on client satisfaction is worth mentioning. Research has shown a positive correlation between GRI ( Global Review Index) and the average room rate. An increase of one point of the GRI (on a scale of 100) can lead to an increase of .89% in average room rate, an increase of .54% in occupancy and an increase of 1.42% in RevPAR. Hotels with a higher GRI are also able to book more rooms via their own website, sparing costs as well as giving the opportunity for the hotel to offer a more personalized service.

We hope, with this knowledge, that hotels will be less inclined to reduce room rates. This crisis should not lead to a common price-war: this would only result in more victims. We are a sector to be proud of. Our guests cannot wait to once again be able to enjoy all of the beautiful experiences that we have to offer. Stay strong!

“This paper was originally published in Dutch by Hospitality-Management.nl”

About the author: Paul Griep has trained Revenue managers for generations at Hotelschool The Hague, where he also works as director of Alumni & Industry Relations. Jean-Pierre van der Rest is a professor of business studies at Leiden University. He conducts groundbreaking research into hotel revenue management and business failure.